The past fishing season started of with a bang, especially with the Bronzies... Ray Newing from Isle of Sheppey came over with Malcolm at the end of Jan. Target species were mostly edibles, but we did fish for Bronzies on 3 occasions. A couple of times we hooked Bronzies on light tackle whilst fishing for edibles, which ended in tears. We did catch a couple of nice size cob, but nothing big. Most of the fish around 4 - 7 kg. Among them we also caught a few rays, sandsharks etc., which was later used for Bronzie bait. It was Malcolm s first outing to Namibia and a hefty 20 Namibian dollar bill was the prize for the biggest fish caught... Ray wrote the following after the trip: "Malcolm has face-booked his fish, and has my N$20 pinned on the shop wall. He also is serious about. going again.
Hope everythings o.k with you, we had a great time there. Thanks!!"

Below is a photo of Malcolm's beast, which took him close to 3 hours to land! 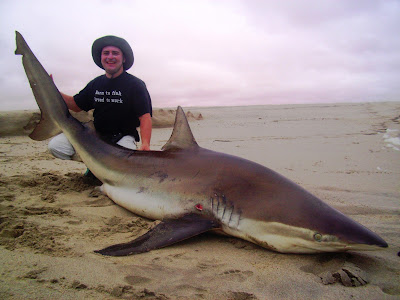 This Bronzie measured 218 cm (from nose to start of the tail) and was estimated to weigh about 160 + kg! A great catch for a first timer! Well done Malcolm!

As this blog is 'new', I have also added some of Ray's photo's from his previous trip.
Ann's steenbra weighed just over 18 kg (I had to use a long rod stand to hang the fish on as Ann could not hold it!)

Next up was Dave Matthews. The Mullet men turned Bronzie anglers! Between Ray's departure and Dave's arrival, we experienced several days of strong south westerly winds which prevailed for several days. This caused the water to cool down considerably, which was good for the gullie sharks and edibles, but it was not so good for the Bronzies. Finding chum and bait was not much of a problem and several days we drove past places where I knew we would bag up on gullies. We also heard several reports from other anglers who caught loads of cob at paaltjies and up north, but we stuck to the Bronzies... In the end we managed 22 Bronzies for the trip with nothing really big. It was frustrating waiting for pick-ups in seemingly perfect conditions, but with not many fish turning up.
Dave wrote the following: "As a matter of interest,the chap in the queue in front of us for the Heathrow flight was that bloke with the plaited beard that we saw on Longbeach. He didn't get a single Bronzie and only hooked one for a few seconds.  Stu was a bit embarrassed to say we had 22 when he asked!
Thanks again!" 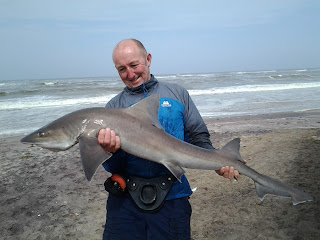 The mullet men will have another crack at it next year...! Their record stands at 44 Bronzies in one trip, with the most caught in one day, on 25!